The Washington State Labor Education and Research Center has just released a report on the economic impact of unions on Washington workers: The Union Effect: Raising Standards for Workers Across Washington. This "first of its kind” document was co-authored by Lee Firori, a graduate student in the Department of Geography and a friend of the center. In fact, it was the Harry Bridges Center that first connected Fiorio with the WA Labor Education and Research Center. 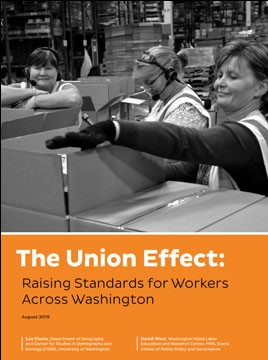 The “Union Effect” report shows clear evidence that unions raise workers’ wages and benefits, and reduce the use of public assistance, benefiting both the states economy and worker well-being.

Click here for The Stands recent article on the report.