This past April, Jinsook Kim, a female welder who spearheaded the struggle to democratize the Hanjin Shipyard Union in South Korea, met ILWU Local 19 members in Seattle. She visited both the University of Washington and ILWU to accompany a showing of the documentary Island of Shadows (2015) at the invitation of UW Professor of History Hwasook Nam. The Harry Bridges Center was a co-sponsor of the visit, along with the University of Washington's Center for Korea Studies, the UW East Asia Center, and the YW Department of History.

The film is a record of the historic shipyard workers’ struggle throughout the 1990s, the period when the Korean shipbuilding industry started to be relocated in Southeast Asia. Notorious for the dire working condition and the deaths of workers, the shipbuilding industry becomes the forefront where the democratic labor union activism meets new challenges and possibilities with the growing social justice movement in Korea. 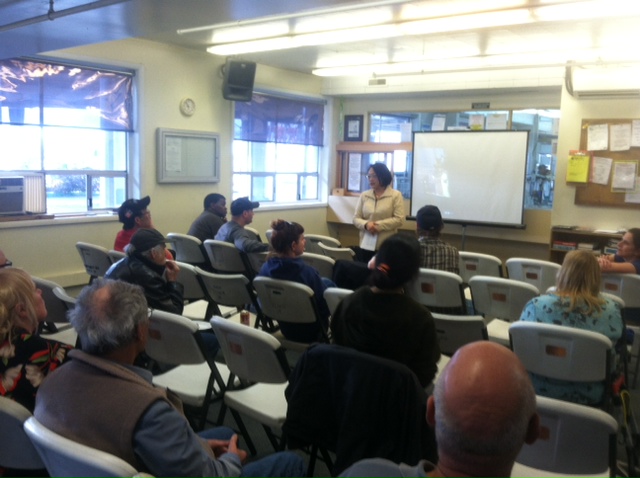 ​Jinsook Kim, who witnessed such transformation during her 309-day high altitude sit-in protest in 2011, shared her stories with members of ILWU Local 19. The discussion continued seamlessly from the political issues between the U.S. and South Korea to international workers’ solidarity.

Jinsook Kim and her fellow union activist Yira Hwang also participated in a day-long workshop at the University of Washington. The workshop included discussions on the historical context of Korean shipyard workers’ struggle, the Hope Bus movement that emerged as the new platform for the unions’ deep involvement in social justice agenda, and the contingent workers’ struggle in South Korea.