Labor Art at The University of Washington: A Guide

Did you know that throughout campus you can find several Labor artworks? Together, these unique pieces (many crafted by workers) tell the history of labor and the labor movement in Washington state and beyond.

The Harry Bridges Center has put together this short guide for anyone interested in viewing these works and learning more about them. 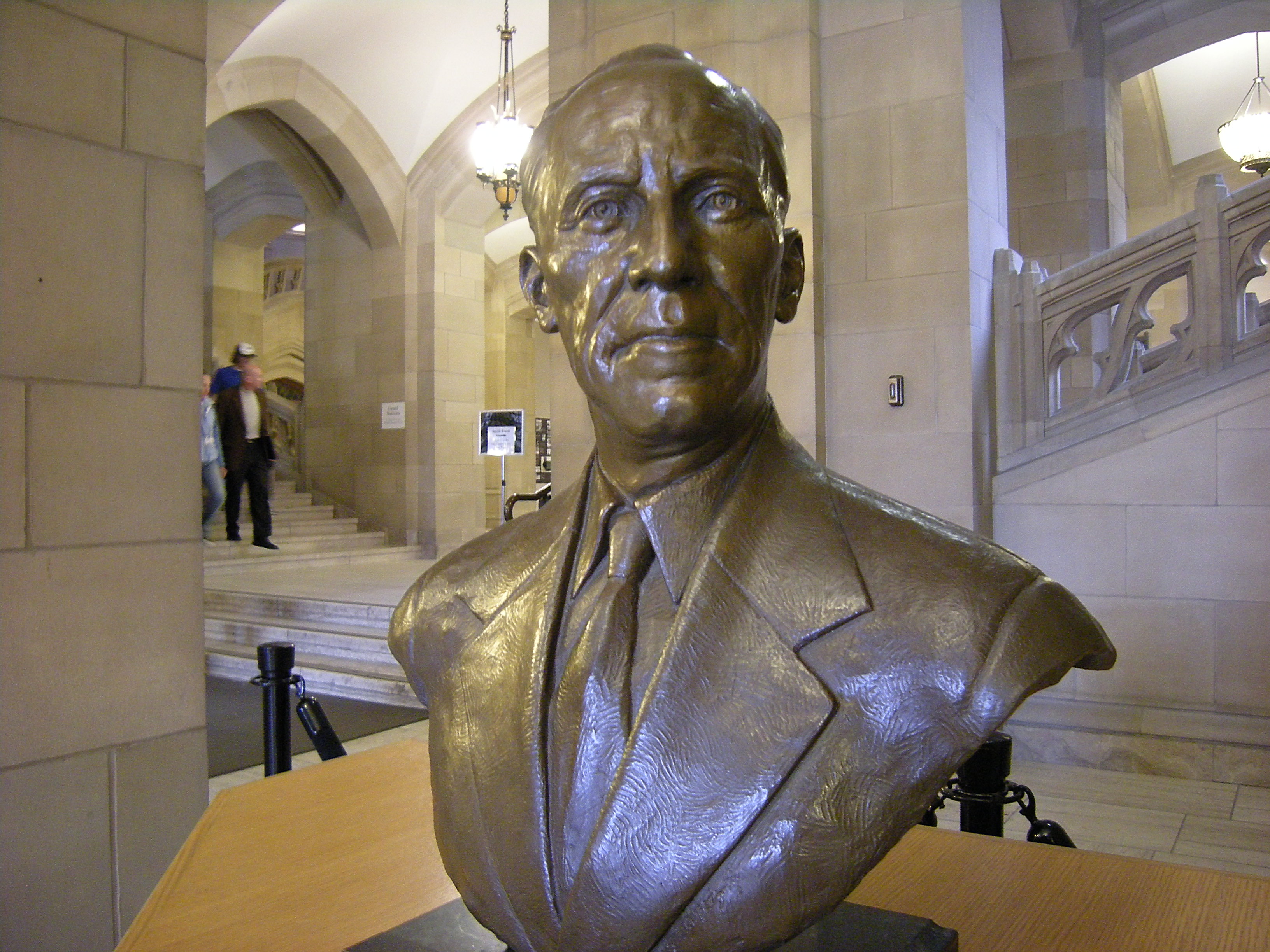 Inside Suzzallo Library, to the right of the stairs, is a twenty-one inch tall cast bronze bust of leading twentieth century labor leader Harry Bridges (1901-1990) by California artist Henry Alvarez. Bridges is shown at the height of his career as founder and president of the International Longshore and Warehouse Union (ILWU), a post he held from 1937 to 1977.  This bust is a duplicate of the 1988 original that stands in front of the ILWU’s International Offices in San Francisco. It was given to the university in 1994 by the ILWU Pacific Coast Pensioners Association to commemorate the university’s Harry Bridges Chair in Labor Studies, established in 1992 through over 1,000 separate donations from past and current ILWU members. A plaque listing the donors to the Bridges Chair appears below the bust. On the opposite side of the bust appears another plaque honoring founding donors to the University of Washington’s Labor Archives of Washington, established in 2010. 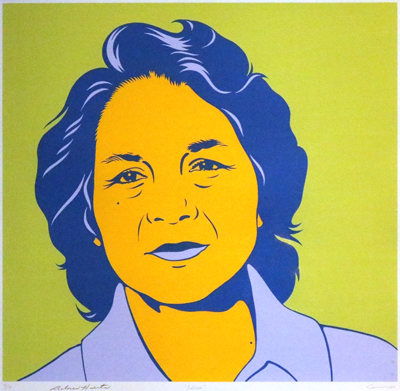 Barbara Carrasco's colorful print honors celebrated labor and civil rights activist Dolores Huerta. Huerta co-founded the United Farm Workers labor union with activist César Chávez in the 1960s. She was a vocal and influential advocate for the rights of workers, women, and immigrants. She fiercely championed ethnic diversity and equality in her activism. Huerta was the first recipient of the Eleanor Roosevelt Award for Human Rights in 1998. She was recipient of the Presidential Medal of Freedom in 2012. Carrasco created this piece in honor of Dolores Huerta's presentation of the 17th annual Ernest Galarza Lecture at Stanford University.

The print is an example of the artist’s body of work depicting Huerta's image. Los Angeles-based artist and muralist Barbara Carrasco creates striking paintings, murals and prints that reflect her Chicana heritage and explore themes of social justice. She creates many images supporting the United Farm Workers. Carrasco notes, "There are so many icons of men, and icons of women painted by men, that I wanted (as a woman) to create an iconic image of Huerta to recognize her as an equal of César Chávez and, historically, the most important negotiator for the United Farm Workers.” In 2008, The Girl Scouts of America created a merit patch about activism, based on Carrasco’s image of Dolores Huerta.

The principal artwork on the second floor of Kane Hall is a sixty by seven-foot untitled mural that is one of the most unusual in the region and the only fresco in Seattle's public places. It is a collection of political and social commentary painted in 1945 by artist Pablo O’Higgins and its subjects relate to civil rights and organized labor in the past, the present (just after World War II), and the future. This mural is painted in the manner of Mexican muralists Diego Rivera (with whom O’Higgins worked in the 1920s) and Jose Clemente Orozco, who revived the ancient art of fresco painting. That medium, used by Michelangelo in his Sistine Chapel ceiling mural, requires application of paint to wet wall surfaces (usually plaster). Such paintings are thus incorporated into a wall. The mural’s irregular shape reflects its original site in the auditorium of the Shipscalers, Drydock and Boatworkers Union hall in Seattle.

The mural’s theme, painted on the banner’s upper left corner, is "Uniting all working people of all nations." Its subjects relate to the past, the present (just after World War II), and the future. On the left-hand panel, Franklin Roosevelt is about to cover a Ku Klux Klan member and white oppressors with a paper listing the four freedoms that should prevail worldwide – freedom of speech and expression, freedom of worship, freedom from want, and freedom from fear. The scroll also bears the initials of the Fair Employment Practices Committee (FEPC), a New Deal creation to combat discriminatory hiring practices. Abraham Lincoln is the other dominant figure in this scene from the past.

In the center panel are men of the time in military uniforms and workers' outfits. They surround two clasped hands, one black and one white. To the right is the artist's vision of the future, where men and women workers become inspired by the revolutionary slogan "Build a free world. No masters. No slaves. Workers of the world unite!" and break the chains that keep them enslaved. In 1945 O'Higgins explained to a Seattle Times reporter that he was portraying "the struggle against racial discrimination and the unity of international labor as one of the most important developments for future peace."

In 1955, Seattle Local 541, of the Shipscalers Union gave this mural to the university.  No place could be found to place its thirteen heavy concrete panels so it sat forgotten in storage for twenty years.  In 1975 it was located by MEChA, a Mexican American student group, which successfully lobbied to have the work restored and displayed.  It was installed in Kane Hall in 1977.

More information about the mural and Pablo O’Higgins is available in an essay by the historian Gigi Peterson for the Seattle Civil Rights and Labor History Project: http://depts.washington.edu/civilr/mural.htm 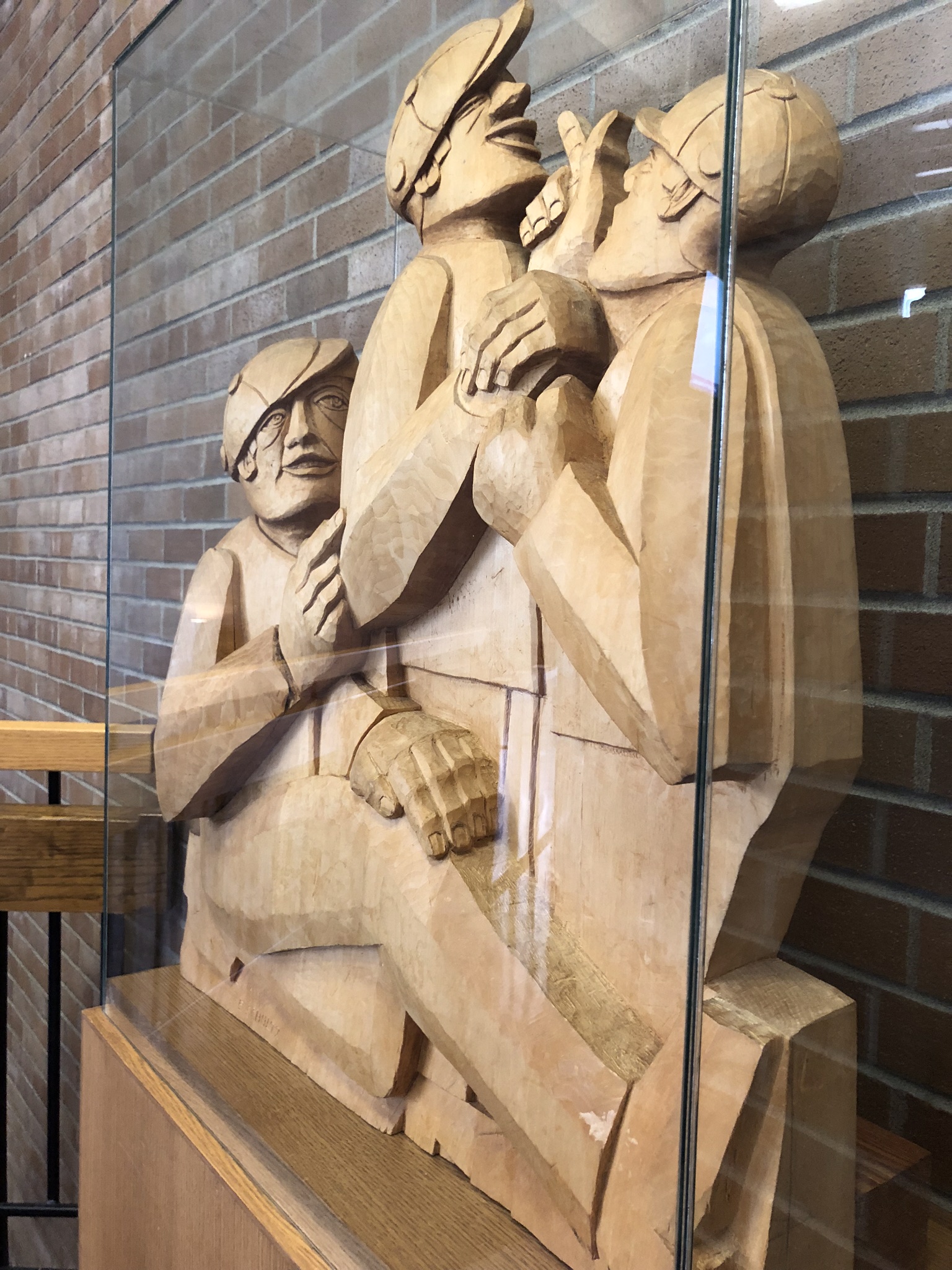 Elias “Dutch” Schultz was born August 26, 1910, and raised in Harlem, New York, a son of immigrant Austrian Jews. During the Great Depression of the 1930s, Schultz was drawn to left-wing causes and fought against fascism in the Spanish Civil War as a member of the volunteer Abraham Lincoln Brigade. He later served in World

War II and afterwards pursued his passion for wood sculpting by studying art in Europe under the GI Bill. For most of his life, Schultz made a living as a longshoreman on Seattle’s docks, where he was at home among fellow working-class radicals, retiring in 1973. Thanks to his union pension, Schultz continued to

practice wood sculpture until his death in 2006 at the age of 96.

Schultz’s work as an artist was dedicated to social justice issues, alerting people to problems of oppression and documenting the powerful emotions of historic and tragic events. His sculpture “Bloody Thursday,” which captures the death of a longshore worker during the pivotal 1934 West Coast waterfront strike, is displayed at Seattle’s Pier 66. This undated piece, “Three Longshoremen Discuss,”depicts Schultz’s fellow Seattle longshoremen Jon Halgren, Frank Corbitt and Ray Nelson, engaged in vigorous debate. Note the union pins on their caps, which indicate they are members of the International Longshore and Warehouse Union. The piece was donated to the Harry Bridges Center for Labor Studies, University of Washington, by Jon Halgren, 2015. 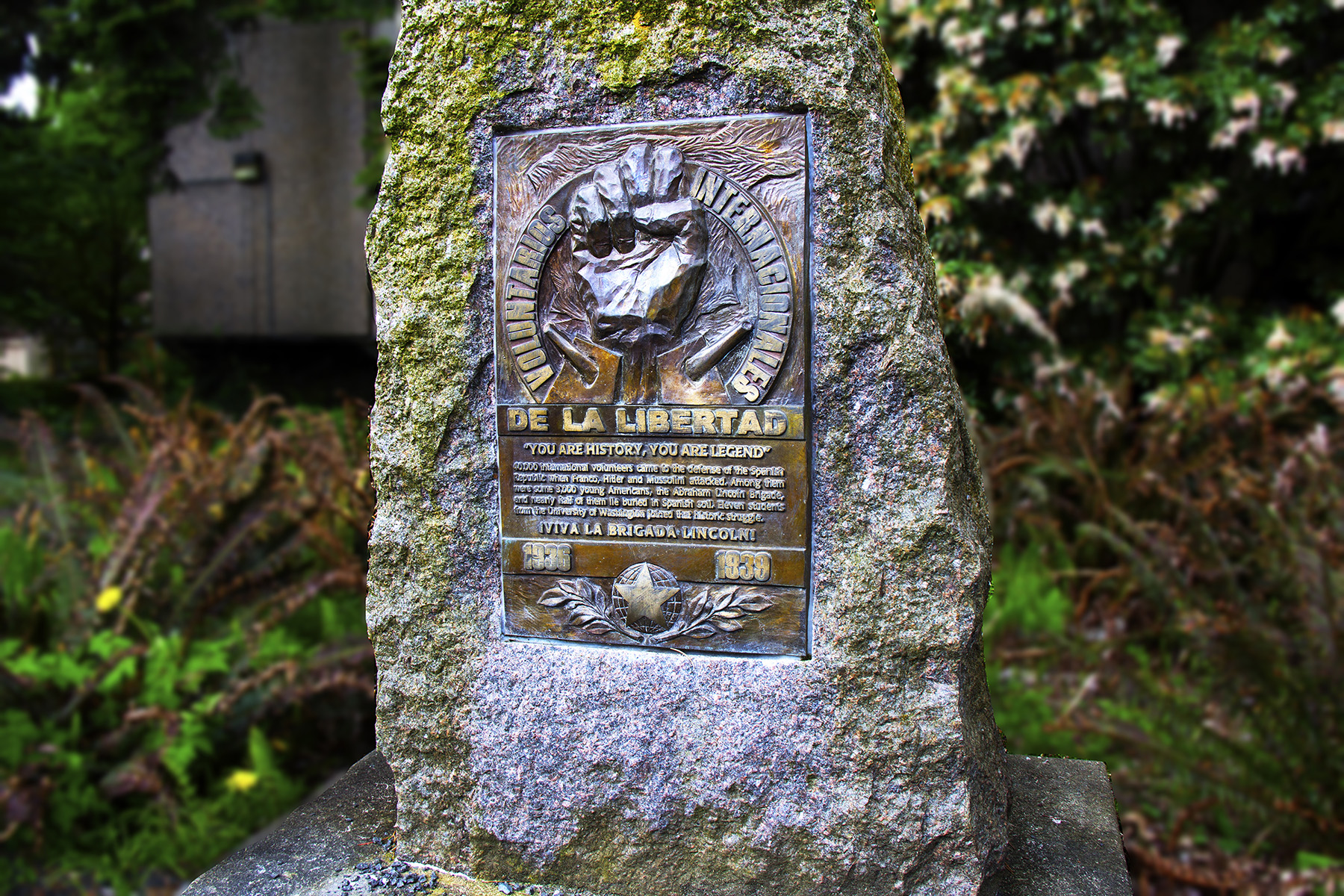 The first major monument in the United States to American volunteers in the Spanish Civil War, this piece consists of a block of granite on which a sculpted bronze plaque has been mounted. Dedicated in 1998, the plaque honors the 11 University of Washington students, 3,000 Americans and 40,000 international volunteers who fought in the International Brigades between 1936 and 1939. The plaque was executed by sculptor David Ryan of Oakland, California.

The dedication of the monument culminated a local effort, spearheaded by the Veterans of the American Lincoln Brigade and Friends in Washington, to honor the Americans who volunteered to fight fascism on the battlefields of Spain in what turned out to be the prelude to World War II. The Spanish army, led by Francisco Franco, rebelled against the elected Spanish government in July 1936. The regular army was met with resistance by a quickly organized defense force consisting of workers, peasants, students and intellectuals. The world communist movement, pursuing the policy of a popular front against fascism, recruited and organized volunteers. Anti-fascist volunteers of all political persuasions volunteered for the International Brigades; 40,000 volunteers from 53 countries traveled to Spain to defend the Republic. Among these volunteers were 3,000 Americans, who had to travel first to France and then by boat or by foot to Spain, where their passports were not valid. Nearly half of the volunteers in what became known as the American Lincoln Brigade died in battle.